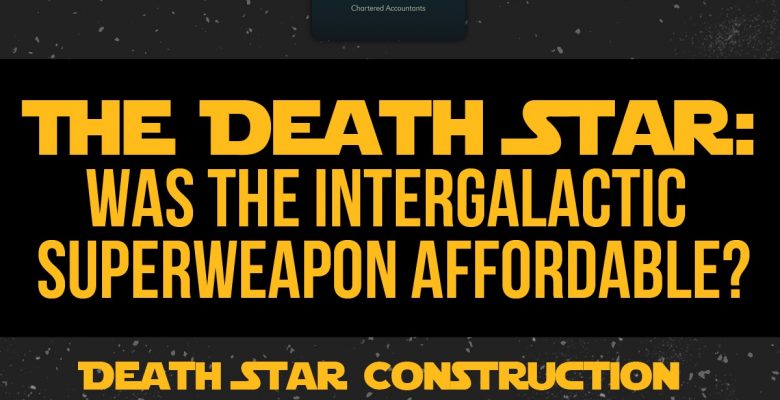 We all love a bit of escapism, which is why Star Wars is so successful. Yet, behind the fantasy of it all, our accountants from Leeds wonder if realism is lurking. Could a weapon such as the Death Star actually be built, or is it just a terrifying pipedream?

Here at Russell Smith Chartered Accountants, we like to investigate. Whether it is the ramifications of a general election or the benefits of establishing a limited company, we’re always hunting for the truth behind the rhetoric.

Today, though, we’re taking a step outside our comfort zone and into a galaxy far, far away. Our accountants from Leeds are a bit obsessed with numbers, which is why when one of us asked the question “could The Empire actually afford a Death Star?” we couldn’t just ignore it.

We won’t waste your time keeping you guessing if it could be done. Below is our Star Wars infographic all about whether or not the Death Star was actually affordable:

There you have it. The Death Star was not only affordable but a downright steal. If you’d like to learn more about how our accountants from Leeds worked all this out, keep reading!

Before we could work out if the Imperial Empire could afford a Death Star, we had to work out the cost of the ultimate power in the universe. Happily, however, we weren’t the first to wonder how much that would be — although we were to first to actually think about the logistics of paying for it.

The folks over at Lehigh University figured out the price for us, at a staggering $852 quadrillion. But, we then had another issue. Since the Empire uses credits, not dollars, we had to convert the currency. Luckily, almost as if designed by an American, the currency in Star Wars converts exactly from 1 dollar to 1 credit, so we were all set.

Things started out smoothly for us, as most of the work was already done. Unfortunately, the honeymoon period didn’t last. Despite the extreme quantities of (now defunct) expanded universe materials, there weren’t many resources that claimed to know the exact population of our galaxy far, far away.

So, we had to do some digging.

Our research led us to some interesting results.

The galaxy in which Star Wars is known to be home to 100 quadrillion intelligent lifeforms — lifeforms the Empire can tax. Of these lifeforms, though, only 75% reside in controlled space. The rest are in unpoliced regions such as planets owned by the Hutts. This includes Han Solo’s pal, Jaba.

So we had our taxable pool, but then we had another issue.

Nowhere in the available Star Wars resources does it state how much tax they actually take from their citizens. This led us to take head from real-world examples. The resulting figure was an estimated 50%, near the highest figure taken by any national authority.

We assumed the Empire probably wasn’t very lenient. But, as a dictatorship masquerading as a democracy, it probably wasn’t going to go too far as to inspire complete hatred amongst all subjugated planets.

Working Out the Average Wage of a Galaxy Far, Far Away

Now we had a tax figure and a taxable population. But how do you figure out how much the lifeforms of a galaxy far, far away actually make? This is where our Star Wars infographic hit a snag, but not for long.

Our accountants from Leeds worked out that there is one planet in the Star Wars galaxy, Coruscant, that actually had data on its citizens and their income. From this, we could work out how much a being on the planet was taxed.

But not all people in the galaxy would be earning this much. Coruscant is an affluent city planet, the home of much commerce and business. There would be many other places without such wealth, such as Luke’s home of Tatooine.

So how do we carry on with our infographic? Again, we drew from real life examples.

Transferring this logic across to our fictional Star Wars universe, we could then make assumptions about how the citizens of Coruscant’s wealth compared to those across the galaxy.

Finally, we had our average wage, which meant we could work out how much tax The Empire could earn from its citizens and how feasible a Death Star really was.

And, as our Star Wars Infographic shows, it was completely within their power to build. It may be a fantasy universe, but that doesn’t mean it can’t be realistic… sort of!

Have you got confusing tax figures you need help solving? We don’t just deal with problems on an intergalactic level; we’ll also investigate your small business’ numbers, too! Get in touch with our chartered accountants from Leeds today.