RS AccountantsGeneralInflation Throughout the Ages: A Leeds Accountant’s Assessment

Inflation Throughout the Ages: A Leeds Accountant’s Assessment 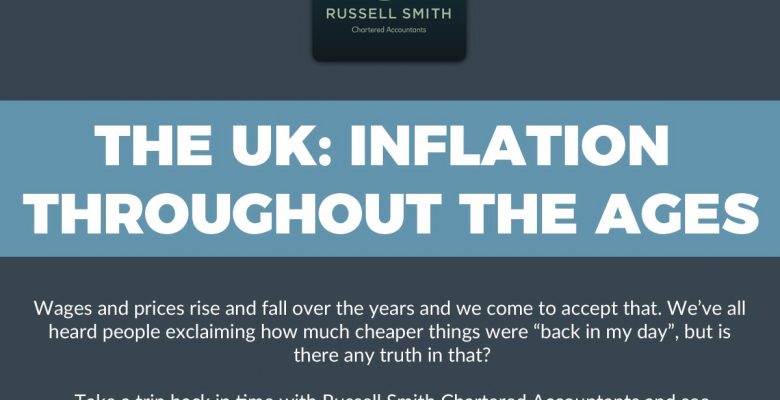 Inflation Throughout the Ages: A Leeds Accountant’s Assessment

I’m sure we’ve all been in the company of misty-eyed elders who regaled us with tales from “back in the day”. A house was a fiver and you could pay for your weekly shop with a coat button… apparently.

But are prices really extortionately high nowadays, or have we lost sight of the value of things? In our new infographic, this Leeds accountant takes a look at inflation throughout history.

Inflation refers to a sustained increase in general price levels in an economy. This leads to a rise in the cost of living. As products increase in price, that means the purchasing power of the pound also decreases. 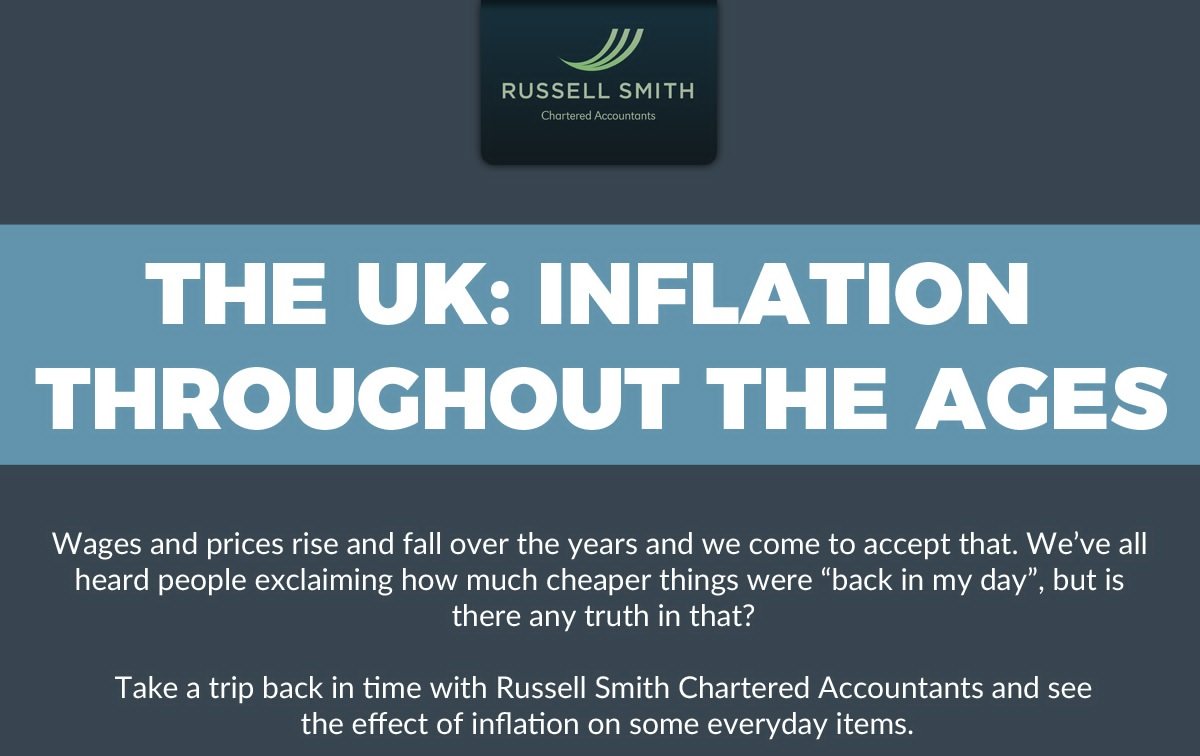 So while £1 would have got you over 40 loaves of bread in the 1950s, nowadays, it will only just get you one. Thankfully, wages have increased substantially since then! As an accounting firm in Leeds, we help individuals and businesses make the most of their money, but even we can’t counteract the effects of inflation.

How Has Inflation Changed the Cost of Living?

Since the 1950s, the average wage in the UK has increased by over 6,500%. In that time, the average cost of a house has increased by almost 10,000%. Of course, we should consider other factors like mortgage interest rates before making snap judgments, but these figures hint at the rising cost of living.

In contrast, the price of bread has increased by 3,769% since the 1950s — well short of the relative wage increase. More efficient production methods and global trade mean that food can be produced far more cheaply than in war-ravaged Britain.

What this Leeds Accountant Thinks About the Freddo Debacle

When talking about inflation, a certain chocolate bar invariably gets brought into the debate: the Freddo. Since its introduction in 1994, the Freddo has undergone two price hikes and a further increase is planned for 2017. From its original price of 10 pence, the frog-themed snack is due to hit 30 pence in the coming months. Outrageous!

If the price of a Freddo rose in line with inflation, the chocolate bar would now cost a reasonable 19p. The extra additions have been touted as a result of rising cocoa prices and financial uncertainty after Brexit. Other chocolate products have also been affected; Mondelez caused a stir in 2016 when it reduced the size of its Toblerone by around 10% to cope with rising costs.

What this shows us is that inflation is not the only factor that affects the cost of living. Changes in the cost of ingredients and fuel can have a big impact on the products we consume on a daily basis.

So When Was the Best Time to Be Alive?

Instead of just monitoring inflation, countries keep a keen eye on what is called the consumer price index (CPI). This measurement is based on the overall cost of certain products and is therefore a good indicator of the cost of living.

The CPI of Great Britain has changed wildly over the decades. There was a huge spike in the 1970s and other significant rises in the 1960s and late 1980s. One graph of the historic CPI shows that, whilst inflation has caused prices to rise dramatically since the 1950s, the current cost of living is not dissimilar to back then.

So, unless you have a mad hankering for Freddos at their former price, we think that the modern cost of living isn’t too shabby!

Are you looking for tax advice in Leeds? Contact our Leeds accountants today to save on tax and increase your profits.