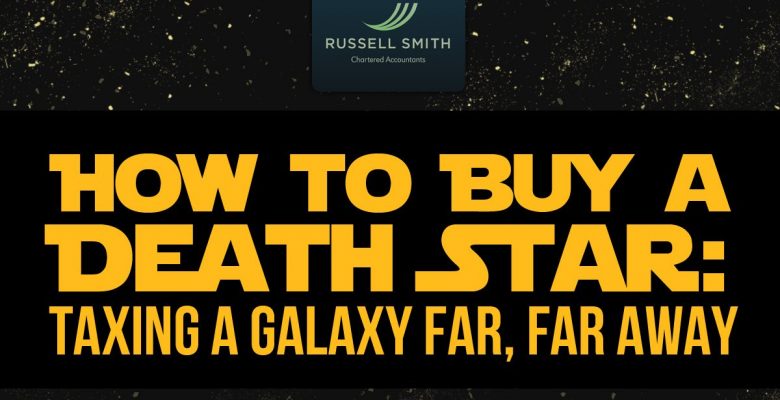 We all know the Death Star was ruled with an iron fist, but how did it come to be in the first place? You guessed it: tax! While Earth-dwelling governments pump civilian tax into transport systems that can’t fly or shoot lasers, the Galactic Empire is more ambitious.

With the new Star Wars movie set to wow audiences all over the globe, we decided to look at the franchise through our chartered accountant lenses. Our latest infographic explains how the Empire, using tax (and enslaved Wookiees), was able to build the most fearsome weapon in the galaxy.

How Much Did the Death Star Cost?

It would also take around 833,000 years to extract all that steel, so it’s not exactly a project for the weekend.

How Did the Empire Pay for the Death Star?

Luckily for the Galactic Empire, there are 100 quadrillion lifeforms in the galaxy who are all potential taxpayers. Many of these are probably freelancers, looking to save on their tax bill. Sadly, an accountant for freelancers is of little use in a galaxy far, far away.

25% of the galaxy is not policed — the intergalactic equivalent of an illegal tax haven. (Little do they know, a chartered accountant could save them tax using perfectly legal methods.) This leaves the Empire with just under one quintillion credits for taxation.

The Imperial Tax Bureau hasn’t released its tax rate, unfortunately, but if we use a conservative estimate of 50%, that leaves the Empire with 500 quadrillion tax credits a year.

That means, with labour costs included, it would take almost two years for the Empire to collect the required 1 quintillion credits. With the use of enslaved Wookiees and aggressive tax spending cuts, the Empire was able to fund the Death Star pretty comfortably.

Musings from a Chartered Account: Could We Build Our Own Death Star?

In 2012, optimistic Americans petitioned their government to build a Death Star, citing job creation and improved national defence as means of justification. Unsurprisingly, the petition fell on deaf ears, with the ginormous cost and flawed design putting off the White House administration.

Nevertheless, we can always hope. Advances in technology mean that the majority of jobs could be outsourced to robots within 30 years, so it’s possible that a giant robotic workforce could start working on a Death Star. Let’s just hope that robots don’t learn how to become freelancer accountants or chartered accountants. Gulp.

To follow in the footsteps of the Galactic Empire, we’d also have to seriously raise taxes. The average UK household pays £826,030 in direct and indirect taxes over a lifetime. Even if we assume the whole world pays the same taxes (and it doesn’t), we’d need more than a trillion families to be able to pay for it. Unless birth rates rise dramatically, that’s not likely!

We all hope to someday own a moon-sized, intergalactic, laser-firing Death Star. But for us Earthlings, that will remain a distant dream.

If you prefer to keep your tax dealings on this planet, Russell Smith Chartered Accountants are the ideal choice for freelancers, the self-employed, doctors and more.

This infographic was brought to you by Russell Smith Chartered Accountants. Please feel free to add this infographic to your own website by copying and pasting the following embed code onto a page or post: